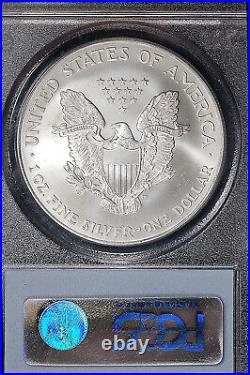 THE PCGS COIN CONTAINER WAS PHOTOGRAPHED ON A BLACK BACKGROUND IN ORDER TO BETTER DISPLAY THE COIN. THE CONTAINER IS CLEAR PLASTIC. ALL LABELS WILL BE REMOVED. ANY MINOR SCRATCHES SEEN IN PHOTOGRAPHS ARE ON THE HOLDER AND NOT THE COIN. YOU MAY ALSO SEE DAMAGE FROM THE ATTACK (BROWN SPOTS, SERIOUS SCRATCHES, OR ACTUAL PHYSICAL DAMAGE).

SEPTEMBER 11, 2001 AT THE WORLD TRADE CENTER. On September 11, 2001 this great country of ours was the victim of a terrorist attack that forever changed the lives of millions of people worldwide. Three civilian airliners filled with innocent lives were hijacked and used as weapons to destroy the World Trade Center and a section of the US Pentagon, center of all military operations.

A fourth airliner, United flight 93 crashed in a rural part of Pennsylvania thanks to the heroism of a few good Samaritans aboard the airplane according to reports given by the media. Because of the total devastation at ground zero, there was virtually nothing left to salvage. The few items that were salvaged became part of the memorial dedication at the site of the former Twin Towers. Inside tower 1 of the World Trade Center, the Commodities Futures Trading Commission held what was known to the investment world as the COMEX vaults. Inside this network of vaults was a vast collection of investment-grade Silver, Gold, and Platinum held by a variety of financial institutions from around the globe.

When the Twin Towers fell, no one expected to find anything salvageable. As the cleanup effort continued, on November 1, 2001 the workers at ground zero reached the Iron Mountain vault located directly under the World Trade Center.

Inside were Silver, Gold and Platinum bullion as well as coins from around the world that miraculously survived the disaster. The coins recovered were from various countries around the world. Under high security, the coins were loaded into Brinks Armored vehicles and sent directly to Collectors Universe, the parent company of the world renowned (PCGS) Professional Coin Grading Service.

They were then cataloged, graded and encapsulated in the patented PCGS high security tamper resistant capsules along with a specially designed commemorative United States Flag insert that immediately identifies the coin as a genuine artifact recovered from Ground Zero at the World Trade Center. These magnificent pieces of our American History will forever remind us of our brothers and sisters in New York as well as the great sacrifices our military personnel have gone through bringing to justice those responsible. It is my solemn belief that holding a piece of History in your hands can bring into perspective the necessity of the sacrifices of our US Armed Forces. This is one Historical piece that can never be duplicated and will serve as a reminder of our Fallen Heroes and fellow Americans that were needlessly killed on September 11, 2001. The World Trade Center Recovered Coins are magnificent pieces of world history brought to you by some very wealthy private individuals.

Their introduction into the market created quite a bit of controversy amongst the world numismatic community especially here in the United States. Never the less, they are what they are, history in our time. One thing is for sure, no more of them will ever be made. By GREG GITTRICH, THOMAS ZAMBITO AND. Workers at Ground Zero unearthed last night a buried treasure of gold, hidden for weeks under the ruins of the World Trade Center.

As a small army of federal agents with shotguns and automatic rifles stood guard, city cops and firefighters packed two Brink? S armored trucks with the lode, sources said. They are taking gold out of there right now, one source said last night. Ve brought in extra cops.

It wasn't immediately clear how much gold was recovered last night or exactly how much was buried under the complex after the Sept. Bank spokeswoman Pam Agnew didn't immediately know if any of that gold was found last night. Other companies are believed to have lost untold gold and valuables in the disaster.

Officials finally got to the gold through that tunnel yesterday, after workers hauled out a 10-wheel. Truck, several crushed cars and mounds of debris.

No bodies were recovered during the operation. As workers inched closer to the gold yesterday, authorities began restricting access to the north side of Ground Zero and FBI and Secret Service agents joined cops and firefighters at the site.

"If I tried to go down there, they would have shot me, " said a construction worker shooed away from the tunnel. A small bulldozer knocked down a wall inside the tunnel and a Brinks armored truck drove in just before sunset. It came out about 7 p. With the first load of gold, sources said. A second truck entered the tunnel a short time later and also was loaded with gold before leaving. A handful of construction workers were held over from the day shift, which ends at 7 p. "They sent most of us on our merry way, " said one worker. This item is in the category "Coins & Paper Money\Bullion\Silver\Coins".