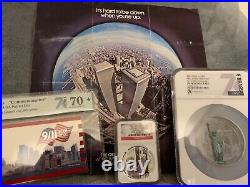 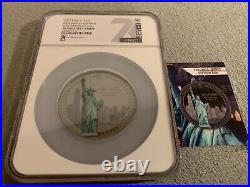 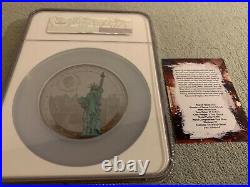 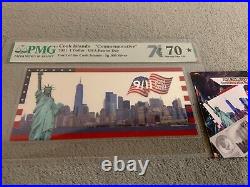 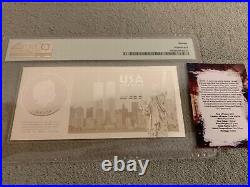 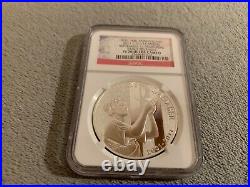 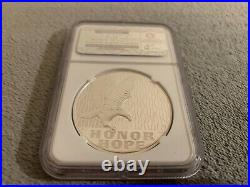 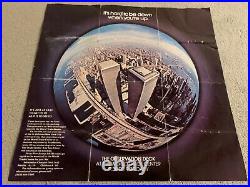 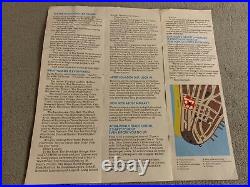 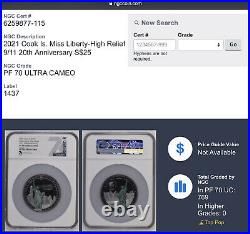 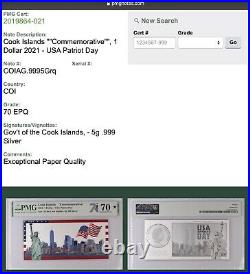 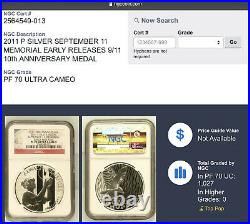 1 MISS LIBERTY PF70 20th Anniversary 9/11 By Miles Standish. This incredible 5 Oz Silver coin depicts the Statue of Liberty and the New York area skylines designed by the well-known professional numismatist and award-winning author Michael "Miles" Standish. The coin is graded PF70 Ultra Cameo, has a Black Proof quality with a beautiful green coloration and comes along with the Certificate of Authenticity. Limited mintage of only 911 pieces worldwide! The reverse of the coin features a light green image of the famous Statue of Liberty and on the back the amazing skyline of New York. On the top of the reverse, the inscriptions: "MS" - the initials of author Michael Standish, "2021" - the issue year, "MISS LIBERTY" - the name of the coin and "9/11 ALWAYS REMEMBER 20th ANNIVERSARY". The obverse of the coin features the back renditions of the Statue of Liberty. On the left part of the obverse, the effigy of Her Majesty Queen Elizabeth II and the inscriptions: "ELIZABETH II" - the name of the Queen, "COOK ISLANDS" - the issuing country and "25 DOLLARS" - the face value. 2 MISS LIBERTY PMG70 20th Anniversary. This commemorative Silver note as a token of those memories and a tribute to those who lost their lives that fateful September day. The bill is partially colored and incorporate a Certificate of Authenticity. Limited mintage of 5,000 pieces worldwide. The reverse of the banknote shows the Statue of Liberty, the New York skyline and the American flag framing it. On the upper part of the reverse side, the American flag with the inscription: "9/11 2001 - 2021" - the day and year of the tragedy and the current year.

The obverse of the banknote shows the Statue of Liberty, seen from behind, the New York skyline and the effigy of Her Majesty Queen Elizabeth II. All around, the inscriptions: "WE WILL NEVER FORGET", "SEPTEMBER 11, 2001", "USA PATRIOT DAY". Around the Queen, the inscriptions: "ELIZABETH II" - the name of the Queen, "COOK ISLANDS" - the issuing country and "1 DOLLAR" - the nominal value. 3 2011 Philadelphia (P) PF70 9/11 10th Anniversary. 1 Oz Silver Commemorative National Silver Medal.

Struck in 1 Troy Ounce of. 999 Fine Silver graded Proof 70 (PF-70) Ultra Cameo by NGC. This piece will display a flawless surface/strike, excellent sharp frosted details and beautiful ultra cameo proof finish. 4 1970s WTC "It's Hard To Be Down When You're Up" Observation Deck Brochure.

Condition is worn, but still a great remembrance of those beautiful towers. Removed from the observation deck in the 1970s.