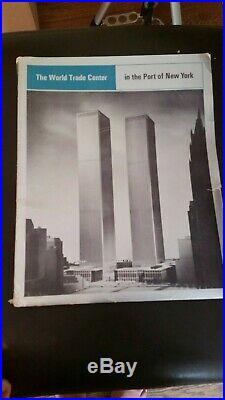 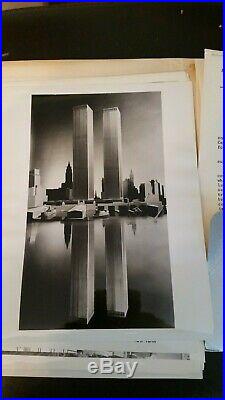 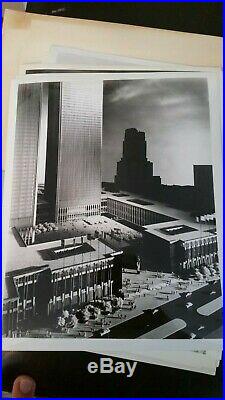 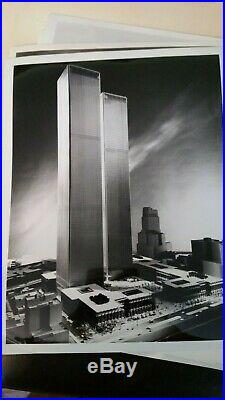 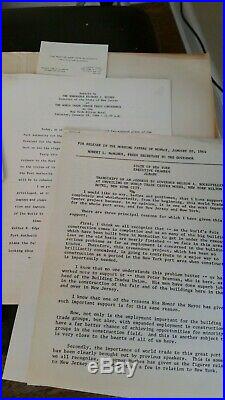 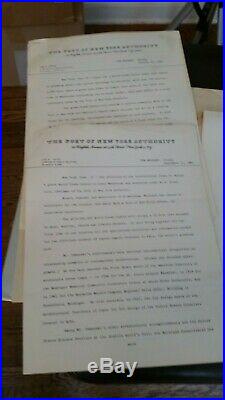 Up for sale is an exceptional group of items that appear to be a press packet distributed announcing the world trade center in New York City. Among the items are photos of models attributed to well known photographer Balthazar Korab, and architectural renderings by Carlos Diniz.

Works of both artists are well represented in museums and private collections around the world. Additional photographs, press releases, and other material is included in this sale. I have never seen anything similar to this collection and it can be considered exceptionally scarce.

1: A paper folder titled on the front with Port Authority information on the back. On the inside are a set of phtos one one side and a set of papers / documents on the other (I assume this remained mostly untouched since its distribution) and a business card from the Port of NY Authority public Relations department. 2: Seven 8 x 10 photographs credited to Balthazar Korab on back.

They are of architectural models of varying styles related to the World Trade Center. Each photograph is described in detail in the photo credit on back.

5 of these photos show the towers and center in the landscape of the city, two show some detail of the buildings. A group of 15 architectural renderings on 8 x 10 photographic paper and a sixteen page on paper crediting the renderings to Carlos Diniz. Renderings show the buildings as part of the landscape and show different up close views of various parts of the architecture. A group of 10 additional 8 x 10 photographs. 7 show various individuals associated with the project including Minoru Yamasaki, architect, Guy Tozzoli director of the world trade dept and Julian Orth, associate architect. The other three are aerial photographs of the Lower Manhattan skyline showing where the WTC would be located. A group of eight documents of varying length that are press releases of various types, length and detail. Briefest is a one page quote by Daniel Bunham, of greatest length is a 25 page document from the Port Authority of New York okayed for release on Monday Jan 20th detailing the project. Other documents include the remarks of NJ governor Richard Hughes on Jan 18th, 1964 discussing the project, a statement by Minoru Yamasaki etc. In total, if everything is included including the packet and business card there are 41 items.

Overall all interior items are in g to vg condition. Some browning to the paper, a couple of the photographs have minor corner creases. Packet itself is probably fair. It is in one piece with some chipping and browning.

This is a fantastic, very scarce group of items. The item "Exceptionally scarce Twin Towers WTC 1964 press packet. Photos, renderings, etc" is in sale since Friday, July 19, 2019. This item is in the category "Collectibles\Paper\Ephemera\1960-Now". The seller is "book14850" and is located in Rockville, Maryland. This item can be shipped worldwide.