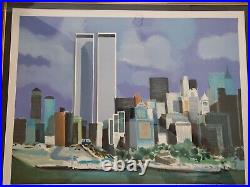 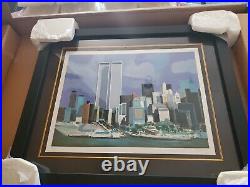 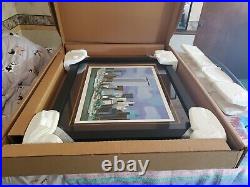 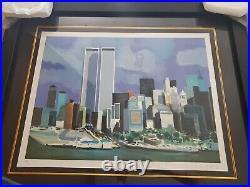 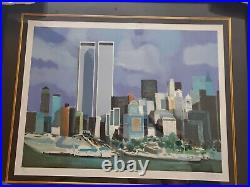 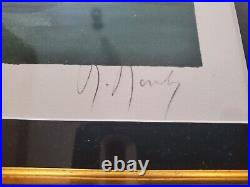 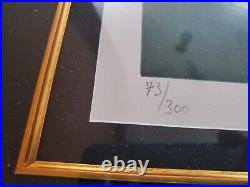 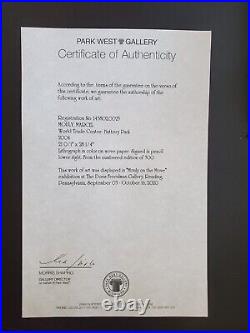 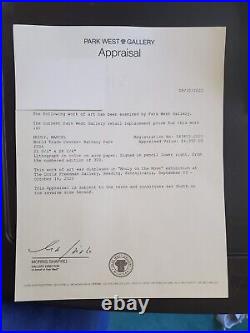 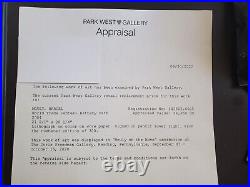 In color on Wove Paper, classically framed in its. Large Size: (Painting) Length 21" x Width- 28" (Framed Size). Photos don't do this artistic legend`s lithograph justice. Mouly`s pieces are not only in high demand. They are done in bold colors capturing the intensity. Don't be Shy Make an Offer! ALL SERIOUS OFFERS WILL BE CONSIDERED. Marcel Mouly's boldly colored, semi-abstract artwork appeals to private and public collectors around the world. Whether they are still lifes, landscapes, interiors, boats, or port scenes, Mouly's works are collected with equal enthusiasm.

Mouly was born in Paris, France on February 6, 1918. His interest in art developed in grade school. A precocious and mischievous child, Mouly was first sent to a drawing class as a form of punishment. However, Mouly loved learning to draw and exhibited a natural artistic talent, though his path to a career as an artist would not be a linear one.

After leaving school at age 13, Mouly worked as an apprentice to a local dentist and later worked for a wine merchant, carrying heavy baskets of wine to make his deliveries. In 1935, while still employed by the wine merchant, Mouly began taking classes at night at the French Academies (the Cours Montparnasse 80), where he remained until his military duty began in 1938.

France fell to Germany in June 1940, and Mouly resumed life as a civilian, eking out a living during these difficult economic times through various odd jobs. During a trip to Normandy in 1942, Mouly and la Fourcade were stopped by German officials.

They were questioned for their lack of travel documentation which was, at the time, required by the Vichy government. Mouly and la Fourcade were arrested shortly after their return to Paris and imprisoned as spies for almost four months. During his solitary confinement, Mouly passed the time by using some of his daily rations of bread to carve chess pieces. Little did he know this would be the origin to his career as a ceramicist.

While in prison, Mouly constantly thought about art and formed the belief that when he was free again, he would become a famous artist. In 1943, shortly after his release from prison, Mouly met fellow artist Édouard Pignon. Mouly learned a great deal from Lipchitz, particularly the style of Cubism. Mouly took his interest in sculpting more seriously, creating humorous clay figures such as dancing couples and musicians.

He presented these to local shops and galleries, signing his works under the pseudonym "Moustache" so his ceramics would not be associated with his paintings. His sculpting career took a professional turn when he befriended potter Pierre Roulot in 1944, who taught Mouly pottery and ceramic techniques. At first he created pipe holders and tobacco pots, but shifted directions to sculpt works based on ancient Greek and pre-Columbian vessels, including bowls, tureens, vases, and pitchers. Mouly used his proceeds to support himself until he earned a living from his paintings. Mouly exhibited two paintings at the Salon d'Automne in 1944.

A year later, Mouly participated at the Salon d'Automne once again, took part in the open art forums of the Ecole de Boulogne. In 1946, Mouly relocated to La Ruche, a famed building of studios, where artists Marc Chagall and Chaim Soutine had worked.

It is here Mouly came to meet Pablo Picasso, forging a partnership between the two artists. By the mid-1940s, Mouly's art garnered renown from his peers and collectors.

Mouly exhibited at the Salon du Mai in 1946 alongside Pablo Picasso, Georges Braque, Henri Matisse, Fernand Léger, and other notable artists. Mouly's first one-person exhibition was held in 1949 at the Libraire Bergmasque. By the 1950s Mouly was looked upon as an emerging, brilliant and skilled young painter. In the mid 1950s, he began to work in the printmaking medium of lithography and was soon recognized as a master printmaker.

He created lithographs until his death, leaving behind a legacy of original graphic works that remain an essential facet of his career. The artist loved to travel, taking at least one trip a year to visit more than 40 countries over the course of his lifetime.

During his travels Mouly often sketched with colored pencils and watercolors to record scenes and ideas to incorporate in his art. Mouly died on January 7, 2008, weeks shy of his 90th birthday.

Mouly continually developed his technique, expertly incorporating his formal art education and the influences of artists such as Picasso and Matisse. One may note Mouly's use of the deep, bold colors typically used in Matisse's Fauvist works, and the recognizable Cubist influence of Picasso, but Mouly's style is uniquely and unmistakably his own.

"I like Picasso for form and drawing and Braque for rhythm, but Matisse remains my spiritual father, " Mouly said. He is the father of color. Mouly's impact on lithography extends beyond his technical mastery. He produced lithographs that reinterpreted painterly subjects, proving that printmaking could rival the artistic achievement found in paint. Despite the numerous, world-changing events that transpired during his lifetime, including World War II, the Cold War, the fall of the U.

And the rise of digital technology, Mouly didn't let them seep into his subject matter. His art remained brilliantly colored, energetic, and transcendent. "His art is pure and direct in its message, " art historian and writer Joseph Jacobs writes. It is an art about beauty and life, an art about the more familiar and comfortable world we live in and know.

In this respect, Mouly is quintessentially French, his roots firmly planted in the School of Paris. Picasso, Braque, Matisse, Rouault, Vlaminck, Chagall, Vuillard, and Dufy are his patrimony, and he has carried their mantel with unflagging dedication. Mouly's work has been exhibited throughout the world and is included in the permanent collections of more than 20 museums, such as the Musee Nationale d'Art Moderne, Paris, the Ateneum Art Museum and Imatra Art Museum in Finland, Paris' Bibliotheque Nationale, and modern art museums in Japan, Gevena and Helsinki. In 1952, Mouly organized the highly esteemed exhibition, "Transposition Poetique, " alongside Szobel and Burtin at the Palais de New York in Paris.

The exhibition brings together the works of Léger, Laurens, Villon, Burtin, Hajdu, Le Moal, Lobo, Manessier, Pignon, Singier, Szobel, and Mouly. The French Minister of Culture recognizes Mouly with the "Chevalier de L'Orde des Arts et Lettres" in 1957. The award is bestowed to those who provide significant contributions to the arts, literature, or the growth of these fields. In 1967, Mouly was commissioned to illustrate a poem by Claude Roy for the book Variations sur l'Amour.

In 1968, Mouly creates illustrations for the annual Polo de Paris, considered the most prestigious enclaves in western Paris. In 1972, Mouly was awarded for distinction in lithography by Mérite culturel Artistique.

A year later, they awarded Mouly with the Premier Prix de Lithographie. In 1988, Mouly was awarded the Farey Nivelt Prize from the Fondation Taylor (Taylor Foundation) and the Palette d'Or from the Salon de Isle-Adam. In 1994, the Fondation Taylor awards Mouly with the Fernand Cormon Prize. MOULY, MARCEL Orage sur le Village Lointain 2006 22 1/4" x 27 3/4" Lithograph in color on wove paper. Signed and numbered in pencil by the artist.

Hand-signed and dated in pigment lower right by the artist. This work of art was displayed in "From Renoir to Kostabi" at Plains Art Museum, Fargo, ND, August 13 - October 18, 2020. Mouly, Marcel La Grande Guitare Blanche (The Large White Guitar) 1992 37 7/8'' x 30 3/8'' Lithograph in color with embossing on Arches paper.

From the edition of 300 (30 artist's proofs also exist). Printed by Atelier Desjobert, Paris.

Hand-signed by the artist and numbered. From an edition of 390 examples (some artist's proofs also exist).