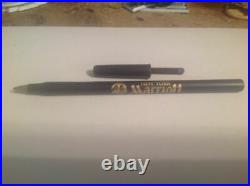 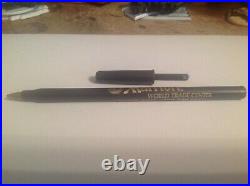 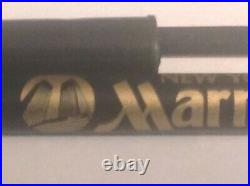 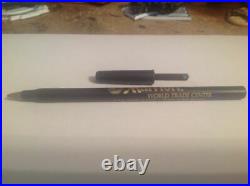 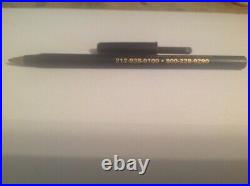 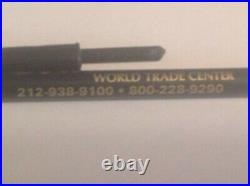 I grade this RARE historic artifact as "Near Mint-Mint, " however Grading is very subjective and I recommend you examine the scan carefully. I guarantee this pen of the New York World Trade Center Hotel to be an authentic, Pre 9/11, artifact and not a modern reproduction.

Here is historical background data: The Marriott World Trade Center was a 22-story, steel framed hotel building with 825 rooms. It was 242 feet high and designed by Skidmore, Owings and Merrill.

Construction began in 1979 and the opened in July, 1981 was the Vista International Hotel. The hotel was connected to the North and South Towers, and many went through the hotel to get to the Twin Towers. The hotel had a few establishments including The American Harvest Restaurant, The Greenhouse Cafe, Tall Ships Bar & Grill, a store called Times Square Gifts, The Russia House Restaurant and a Grayline New York Tours Bus ticket counter, a gym that was the largest of any hotel in New York at the time, and a hair salon named Olga's. The hotel also had 26,000 square feet of meeting space on the entire 3rd floor along with The New Amsterdam Ballroom on the main floor, and was considered a four-diamond hotel by AAA.

The structure was destroyed on September 11, 2001 in the collapse of the North and South Towers of the World Trade Center. On September 11, 2001, the hotel was at full capacity, and had over 1,000 registered guests. In addition, the National Association for Business Economics (NABE) was holding its yearly conference at the hotel. When American Airlines Flight 11 crashed into the North Tower (1 WTC), the landing gear fell into the roof of the Marriott hotel. There were many eyewitness accounts from firefighters who went up the stairs in the Marriott hotel to the second floor. Firefighters used the lobby as the staging area, and were also in the hotel to evacuate rooms with guests who were believed to be still inside the hotel. Firefighters also reported bodies on the roof from the people who had jumped or fallen from the burning towers. The collapse of the South Tower (2 WTC) destroyed the center of the hotel such damage can briefly be seen in the documentary film, 9/11, and the collapse of the North Tower destroyed the rest of the hotel aside from a small section (as seen on the picture) that was farthest from the North Tower. Fourteen people who had been trying to evacuate the partially destroyed hotel after the first collapse managed to survive the second collapse in this small section. The section of the hotel that had managed to survive the collapse of the Twin Towers had been upgraded after the 1993 bombing.

As a result of the collapse of the Twin Towers, the hotel was destroyed. Only the south part of three stories of the building were still standing, all of which were gutted. In the remnants of the lobby, picture frames with the pictures were still hanging on the walls. Approximately 40 people died in the hotel, including two hotel employees and many firefighters who were using the hotel as a staging ground.

In January 2002, the remnants of the hotel were completely dismantled. The building and its survivors were featured in the television special documentary film which premiered on September 11, 2009. THIS ITEM IS IN GREAT LIKE NEW CONDITION... The item "NEW YORK MARRIOTT WORLD TRADE CENTER-(HOTEL PEN-ORIGINAL) PRE 9/11-VERY RARE" is in sale since Friday, August 28, 2020. This item is in the category "Collectibles\Historical Memorabilia\Other Historical Memorabilia".

The seller is "hoganheroes1" and is located in Ottawa, Ontario. This item can be shipped worldwide.