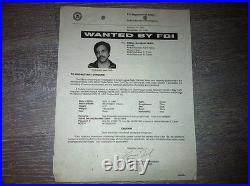 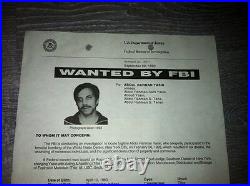 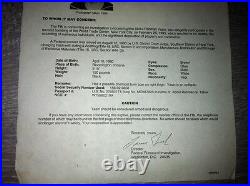 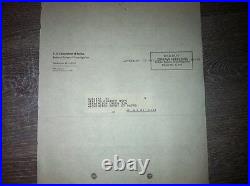 YASIN helped make the bombs used in the 1993 World Trade Center bombing. Yasin is of Iraqi heritage. And grew up in Baghdad.

He has been characterized in the American media as the only participant in the first attempt to blow up the World Trade Center in 1993 who was never caught. THE POSTER IS IN PHENOMENAL CONDITION AS YOU CAN SEE. IT WAS ISSUED SEPTEMBER 20TH, 1993. YOU CAN LOOK LONG AND HARD AND YOU'LL NEVER FIND HIM ANYWHERE.

HE IS HIGHLY SOUGHT AFTER BY COLLECTORS. PLEASE MAKE US YOUR BEST OFFER, WE WILL ACCEPT ANY REASONABLE OFFER.. Yasin was born in Bloomington, Indiana. Where his father, originally from Iraq.

Went to study for a PhD. Yasin is therefore an American. Shortly after his birth, Yasin's family moved back to Iraq. According to university records, Said Taha Yasin, an Iraqi, attended Indiana University.

He had acid burns on his legs and jeans from bomb chemicals. Soon following investigation of the attack on February 26, 1993, Yasin was picked up by the FBI on March 4, 1993, the same day as the arrest of Mohammed A. In a sweep of sites associated with Salameh.

Yasin was found in the apartment in Jersey City, New Jersey. That he was sharing with his mother. Yasin was taken to New Jersey. Where he was reportedly very cooperative.

Agents had Yasin retrace where and how the WTC bomb had been built in New York. Yasin said he was released after giving agents names and addresses, and went to Iraq. In Baghdad, Iraq, Yasin lived freely for at least a year.

The Iraqi government later claimed he was arrested and put in prison. In March, 1993, Yasin boarded Royal Jordanian. Flight 262 to Amman, Jordan.

From Amman, Abdul Rahman Yasin went on to Baghdad. November 1997 marked the month when two others were convicted in a court for their contributions to the bombing, but only "one other man believed to be directly involved in the attack, Iraqi Abdul Rahman Yasin, remains at large". Spokesman of Iraq, claimed that in the 1990s all Iraq wanted in return was a signed statement that Iraq had handed over Yasin.

But reportedly the statement presented to the U. At the time contained lengthy wording essentially exonerating Iraqi involvement in the 1993 WTC attack. Stated that there was no CIA.