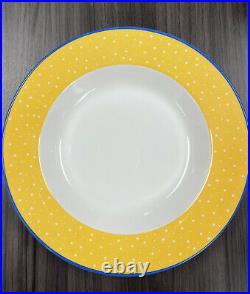 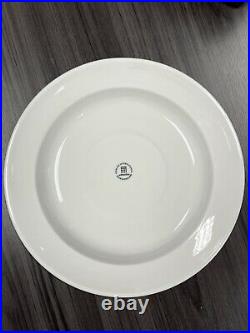 Part of a dinner service from the World Trade Center's "Windows on the World" restaurant complex, comprised of six plates and bowls of graduated size. The Deco style porcelain dishware was spared destruction because it was used at a private dinner party right before the 9/11 terrorist attacks.

Provenance: From the collection of Ron Hoskins, assassinologist. Isolated scattered light surface scratches or scuffs, else near fine. The main dining rooms of the "Windows on the World" restaurant complex were located on the 106th and 107th floors of the North Tower of the World Trade Center. Originally opened in 1976, the restaurant was temporarily shuttered following the 1993 bomb explosion, renovated, and reopened with great fanfare in 1996; its 25th anniversary celebrations were slated for October 2001. Prior to its destruction on September 11, 2001, the "Windows on the World" restaurant ranked as the highest-grossing restaurant in the United States, typically serving 800 lavish dinners per night, and attracting many celebrities.

Milton Glazer designed the yellow, cobalt blue, and white porcelain "Windows on the World" restaurant dishware, other examples of which can be seen in the attached archival photos of the restaurant. The dishware included star-, moon-, cloud-, and sun-decorated dinner plates, demi-lune salad plates, dessert plates, soup bowls, and flatware. Glaser's distinctive restaurant logo, dishware, menu design, and select interior decoration elements emphasized the restaurant's spectacular vantage point high above the Manhattan skyline. There are very few remaining examples of any "Windows on the World" dishware, including a handful of pieces found in the "September 11: Bearing Witness to History" collection at the Smithsonian National Museum of History see attached photo. This is because the restaurant, along with all of its furnishings, was obliterated in the collapse of the World Trade Center.

The item "Windows on the World Soup Bowl 9/11 September 11 Trade Center Twin Towers Plate" is in sale since Monday, September 13, 2021. This item is in the category "Collectibles\Decorative Collectibles\Collector Plates". The seller is "historicalautographsgallery" and is located in New York, New York.

This item can be shipped to United States, Canada.